Sign in using the following social media accounts
Connect with
Published 9 hours ago
For nearly six weeks, the EOS price rose in response to the rising parallel channel pattern. However, the pattern could contain the growth in bullish momentum, resulting in an upside breakout. Can this run-up reclaim the $1.2, or the coin has some retracement plans?
advertisement 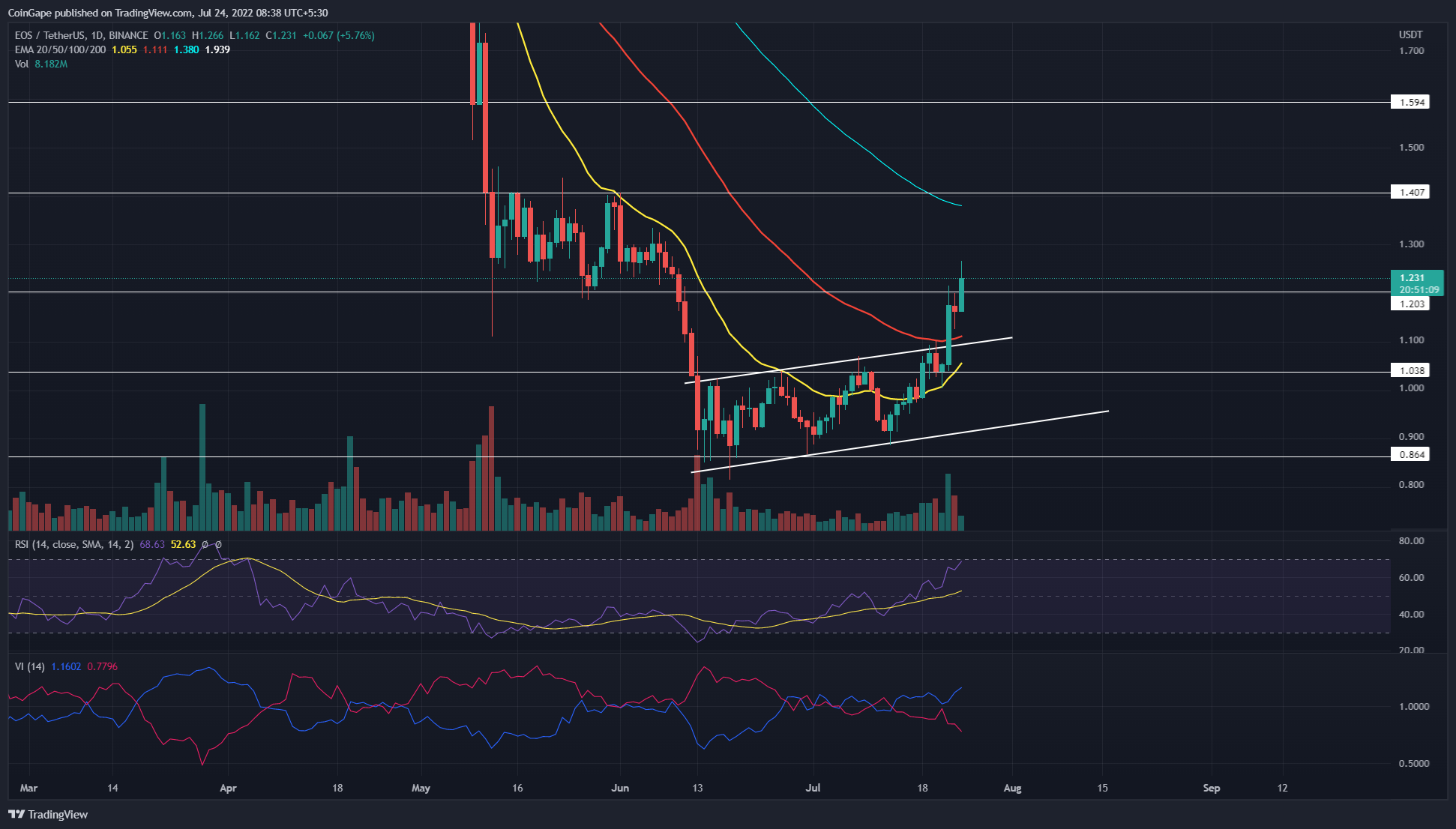 Source- Tradingview
Following June’s first half bloodbath, the EOS/USDT pair ascended steadily within a rising parallel channel pattern. In addition, the altcoin retested the trendline barriers multiple times, indicating the traders are actively responding to this pattern.
However, as the positive sentiment is returning to the crypto market, the EOS price witnessed significant growth in bullish momentum, which resulted in an upside breakout from the pattern. On July 22nd, the coin buyers breached the overhead resistance trendline with a massive bullish candle, supported by a substantial volume rise.
The breakout rally reclaimed the 20-and-50-day EMA and pierced the horizontal resistance of $1.2. However, the high-wick rejection attached to this candle indicates profit booking from short-term trades, which may encourage a minor retracement,
Furthermore, this expected pullback should retest the shared support of the ascending trendline and 50-DAY SMA. If the EOS buyers sustain these flipped supports, the resulting rally may obtain enough juice to hit the $1 resistance.
Thus, the post-retest rally is expected to drive EOS price 28.6% higher to $1.4.
On a contrary note, a breakout from the mentioned support or the $1 mark would invalidate this bullish theory.
Bollinger band indicator:  after showing multiple crossovers between VI+and VI- slope, the indicator maintained a significant bullish spread, indicating the sustained buying in the market. Moreover, these slopes continue to expand, suggesting the buyers strengthen their grip over this coin.
advertisement
RSI– The RSI slope jumps back into the bullish region and indicates a positive switch in trader’s sentiment, supporting the current rally. Moreover, a constant rise in the indicator slope bolsters the breakout trade.
Published 16 hours ago
Published 19 hours ago
Published 19 hours ago
Published 19 hours ago
Published 21 hours ago
advertisement
advertisement
Your daily dose of Market analysis & Price updates.

Solana vs Ethereum Which One Is Better  Altcoin Buzzsource

Disclaimer: The Industry Talk section features insights by crypto industry players and is not a part of the editorial content...

PAC’s role in 2024 and its ability to influence your Supontis token $100 fiat bonus, Polkadot, and Tether – The Cryptonomist

XRP whales have been spotted moving huge bags of crypto as Ripple’s lawsuit with the U.S. Securities and Exchange Commission...

PAC’s role in 2024 and its ability to influence your Supontis token $100 fiat bonus, Polkadot, and Tether – The Cryptonomist