The battle for supremacy among crypto exchanges has often come down to the amount of bitcoin that they hold. This is due to the prestige that comes with the pioneer cryptocurrency and, of course, the value that it commands. For the longest time, Coinbase has maintained its lead in the market when it comes to bitcoin holdings. However, it looks like there is a new king in town as Coinbase’s bitcoin holdings have fallen.
Data analytics firm Glassnode is known for providing data in the market using on-chain metrics. This time around, the firm has emerged with a shocking finding that puts Coinbase’s hold over the market at risk. Its most recent report showed that Coinbase is no longer the exchange with the largest bitcoin balances in the space. That title now belongs to Binance, which is lauded as the largest cryptocurrency exchange in the world due to its volume.
Related Reading | DeFi Tokens Are The Winners Of The Recovery Trend With Double-Digit Gains
The finding was made public on Twitter by market analyst Will Clemente when he posted a screenshot from the Glassnode report. It showed that while Coinbase’s bitcoin holdings had continued to decline through the last year, Binance had been soaking up a considerable amount of bitcoin. 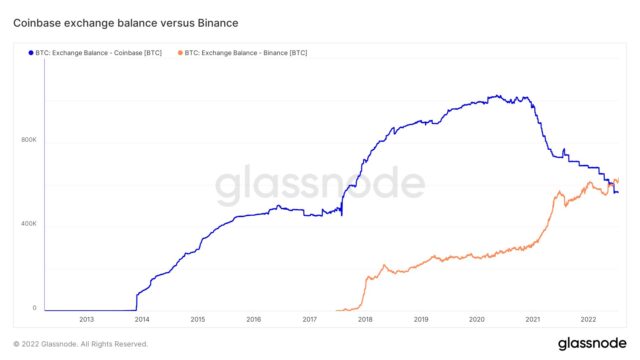 According to Glassnode, Coinbase now holds less than 600,000 BTC. Binance, on the other hand, saw its Bitcoin balances grow to a new all-time high amid the bear market. A comparison of the two balances over time shows that the majority of the BTC leaving Coinbase was most likely flowing into competitor, Binance.
Following Will Clemente’s post on Twitter, an employee of Coinbase has come out to refute the claims, saying that Glassnode had used irrelevant metrics for its report. Hence, there is no way that its findings could be correct given its bitcoin that are held in cold storage.

The Binance flippening is not the only thing that has been a cause for concern for investors, though. Over the past week, various rumors have been circulated on social media claiming that the crypto exchange was insolvent. This came after the Voyager and Celsius insolvency issues, fanning the flame of the rumor.
Related Reading | Bitcoin’s Recovery Signals The Start Of A Bull, But Is The Bottom Really In?
There have also been reports from Coinbase users that they have been unable to withdraw funds from the exchange. These issues have cumulated to what is now a lesser trust score for the exchange among cryptocurrency users. The exchange has recently shut down its affiliate marketing program, fueling the rumors of an impending crisis for Coinbase.
Follow Best Owie on Twitter for market insights, updates, and the occasional funny tweet…
For updates and exclusive offers enter your email.

SearchFour years after pulling out of Japan, Binance, the world’s largest crypto exchange, will seek a license to operate in...

Vitalik Buterin on What’s Next for Ethereum After the Merge  WIREDIs post-Merge Ethereum PoS a threat to Bitcoin's dominance?  CointelegraphJPMorgan Sees Concerns...

Uniswap, Ripple, and Moshnake: DeFi Projects You Should Consider Adding To Your Cryptocurrency List – Analytics Insight